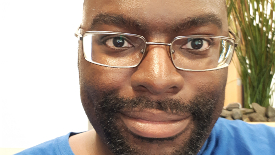 Hi everyone, and thanks for joining us for our newest Learner Success Story. Today we’re having a chat with Mike Murray, a long-time gamer and career-minded game developer!

Thank you so much for joining us, Mike. To start things off light, what got you into programming and game development?

I gained an interest in programming when I was in high school. My school offered different programming courses, and the first game I ever made was during one of those courses. It wasn’t a class assignment; it was just something I felt like doing on a whim. I’m into RPGs, so I decided to make a simple turn-based combat system. I made it with an old programming language called Turing, which you probably never heard of unless you attended a Canadian school in the 90s like I did!

A lot of your programming has been done on your own time. Can you tell us how you’ve gone about that and balanced it with other elements in your life?

I picked up various books on different programming languages and applied what I learned by making small games. For example, when I taught myself C++, I used the knowledge I gained to make a small card game. I even made a CPU opponent!

Normally, I would use any days off I had from the job I had at the time to work on games. That’s pretty much the only time I had. Making games, even tiny ones, is a lot of work, and I have nothing but respect for people who manage to make them.

As you’ve studied, you’ve also been hard at work building your portfolio. How would you describe the experience of building a portfolio with how you decided to go about it?

It’s very important to have a portfolio that shows what you’ve created, and to have a website where you can host your stuff. I’ve been using Itch.io to showcase my games, and I’m so glad that site exists for people like myself.

One setback I’ve had with my portfolio was that some of my games were made with Flash. As we all know, Flash is dead, so that meant some of my old games no longer worked. But I used that opportunity to remake them using Unity, and to make them playable with WebGL.

Your portfolio is filled with plenty of projects already, so can you tell us about any of those project pieces you’re particularly proud of?

I’m most proud of the first game I published, which is called Tile Crusher. I originally made the game for Windows Phone (remember that?) using the XNA framework, and then made an Android and PC version with GameMaker Studio. When I was working on the newer versions, I decided to add more levels and remake the graphics so the game looked nicer.

You can find Tile Crusher here, free to play:

What are your future plans project-wise and career-wise?

My plan is to work in games professionally – with a small or mid-sized team. If I had the means, I’d even go solo full time. Although it’s a longtime dream of mine to make games for a living, the road to achieving that dream has been a hard one. I’ve even asked myself if what I’ve done so far was worthwhile. But I’m still fighting, still motivated.

I’m working on a new project, but I don’t have anything to show yet. It’s a concept for a puzzle game based on Tetris Attack/Puzzle League mixed with RPG combat. It sounded interesting in my head, which is why I’m now designing a prototype to see if it’s actually fun.

We are overjoyed that our courses have helped you on your journey. What drew you to Zenva’s courses, particularly for picking up Unity again?

I learned of Zenva through a website called Fanatical. I was looking to learn Python, and I saw some deals they had, one of which included a discounted course called Python Foundations. So I decided to check it out, and found the course helpful.

So, when I got around to dealing with my old Flash games that didn’t work anymore, I wanted to use Unity to remake them. The problem was, I hadn’t used Unity for a long time, and needed to refresh my knowledge. The Python course I took was pretty good, so I thought, why not see if Zenva offered Unity courses? Turns out they did, so I went and grabbed a bunch of courses. Now, I’m actively using Unity again and learning new things as I go!

We appreciate having this chat with you Mike, and we’d like to end things with one last question. What tips do you have for aspiring game developers – especially those looking to build their own portfolios?

I would recommend anyone who has games to show off to make it as easy and quickly as possible for people to play your games. Another thing I would suggest is to keep the scope of your games small, especially if you’re working solo. Focus on adding the core gameplay, and nothing more. All of the games you make for the portfolio should be considered prototypes. And finally, use Itch.io to host your games. There’s no cost, and you have access to some nice tools to help show off your games.

That wraps up this Learner Success Story. A special thanks to Mike for chatting with us, and we can’t wait to see where he goes next with his game projects!

You can check out Mike’s amazing portfolio on itch.io – where you can find lots of fantastic games to play.

Alternatively, you can also check out Tile Crusher which is available for Android and PC.

Want to keep up with Mike in general? Consider following him on Twitter!