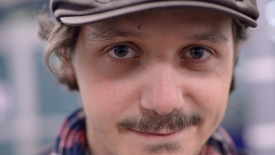 Hello, everyone, and welcome! In today’s Learner Success Story, we’re joined by François Message, a director and cinematographer who has dived deep into game development.

It’s lovely to speak with you, François. To start things off, we’d first like to ask what got you interested in game design and video games?

I’ve always been! As a kid, I learned how to code in Basic on my Vtech Genius 4000, and I was really passionate about it. I also developed a whole adventure in Zelda Classic – I even invented my own puzzle designs. Unfortunately, I didn’t make any saves and my hard drive died. 6 months of work, lost forever!

Later in high school, I spent more time on my calculator programming games than doing actual math. These weren’t any good, but I had a lot of fun making them from scratch instead of copy/paste code from the internet.

As for what drove me in, the first games I’ve ever played were Space Quest I and III on MS-DOS. In these games, you have to type every command for your character in a text parser. So, you have to guess what the developers were trying to make you do, instead of doing it in a more modern game. Thinking this way led me to see games from a developer’s perspective.

Before getting into game design, you’ve of course had a long career as a director and cinematographer. What inspired you to pursue game development in addition to this?

When I learned math and IT in college, I wasn’t really convinced that I wanted to do this every day of my life. I redirected my studies towards movies and cinematography, and that really suited me better. I love being outdoors too much to spend my life in front of a computer!

In college I worked for Guillaume Defare, he became my best friend. We share our love for pop culture, sci-fi, horror, and have made a dozen movies together since. We always talked about making an FMV video game, but it was more a fantasy than something we could achieve.

In 2019, Lesly Grange and I started a YouTube channel, called “Les Jeux à Deux Balles” (you can roughly translate it as “the cheap-ass games”) where we played the cheapest games we could find and analyzed their gameplay and design. That’s where we started to work together and really consider getting into game design ourselves.

During this time, I also had a small chat group with a few friends trying to get into game design for narrative purposes called “FicNar”. We gathered every month and spoke for hours about game dev, game design, graphic design, UIs, etc. It was amazing, and it really got me back into game dev.

That’s when I started to learn a little bit about Unity, but I was lacking time to really dive into it. In 2020, I was hired as a cinematographer on a horror feature, a sci-fi series, and a really interesting documentary. These were the projects that were about to really launch my career.

And then COVID happened, and everything was canceled (or postponed to 2022 for the documentary). I had a lot of time to myself, and I overcame my growing depression by learning Unity for real this time.

In general, how would you say your previous experience as a director and cinematographer has affected how you go about creating games?

First of all, you learn how the human works. How eyes work, that’s called color management and graphic design. How ears work, that’s sound design and sound mix. How emotions work, and that is storytelling, character development, and dialogues. These sorts of skills are super important as a storyteller no matter the medium you’re using.

Then there is the industry. In the movie business, no one is there to help you. It is a very tough environment. I witnessed (and lived) betrayals that people outside the industry couldn’t possibly imagine. It forces you to see everything from a business perspective: you have to communicate a lot, and be open to every opportunity. That helped me when we started our company, Burning Sunset.

Fortunately, the video games industry is much nicer! There isn’t so much gatekeeping, and as far as my own experiences goes, everyone in the industry has made me feel that every project is welcome – no matter how big or small it is. People help each other not only on technical issues, but financial or administrative as well. That is so refreshing!

I’ve been a client of Humble Bundle from the start of their website. Every time they offered Zenva Unity classes, I bought the whole package, with the idea somewhere inside my head that it would help me someday and that I will take the time to learn Unity. So, I had Zenva as a bookmark on my web browser for a couple of years before I really started to learn.

You’ve managed so far to complete three games: I Wanna Build A Robot, Multiverse Justice, and The World After. Can you tell us about these projects and your experiences working on them?

I Wanna Build A Robot and Multiverse Justice were game jams projects. I didn’t really develop anything in the first one, my associate Lesly Grange did that. He was ahead of me in Unity, and I had to make the visual assets – so I learned how to make pixel art in one week. Knowing already about how colors work and being a huge fan of old-school pixel art, it wasn’t a problem.

When we made Multiverse Justice, I took more classes at that time. I knew a little more about the engine, so I did develop a bit of it. As Lesly was really busy figuring out how to make the enemies shoot and walk the way he wanted, I had more space to dive into Unity.

Meanwhile, during these two short, pixelated experiences, Guillaume had an idea for a very small, absurd FMV game during his own lockdown. He wanted to make a game where your character wants to get out but he has no sanitizer and no mask so she has to make them from various objects in the house.

It was a fun idea, but Lesly and I wanted to take things further. If we had to figure out FMV-style gameplay inside Unity, we should make a real game out of it as well. And that’s how we started to produce The World After.

Making the movie part was the easiest thing; we have a really long experience on making horror movies. We reunited a part of the crew of our latest feature, Necrologies, and just did it in two weeks.

After that, I did the video post-production (editing, visual effects, color grading) as well as the graphic design of the game and Lesly did the sound design and most of the programming inside the game. The game was self-published on Steam during May of 2021, after 10 months in the making.

What is next on the horizon for you in terms of game development?

For now, we still have a lot of work on The World After. We want to make mobile ports on Android and iOS, we have a retro-filter DLC in the making, and we have to find money to finance a marketing campaign.

After that, we are thinking about developing our own package for Unity in order to make FMV games more easily. It’s hard to find the correct tools when you’re the only one in the world making FMV point and clicks! For The World After, we had to fiddle with a lot with existing plug-ins, but it was quite hard to do very simple things (such as playing audio and video in sync separately so we can have several languages…). We don’t want that for our next games.

After that, we have several options for new games, but the follow-up to The World After is an option we consider seriously.

As we wrap this interview up, François, we have one last question for you. What tips do you have for others making their first games, especially when coming from other careers?

Everyone has his own journey, but the thing that helped me the most is to get involved in the community. There are tons of resources, forums, Discord channels, etc. with a lot of people that will help you if you dare to ask.

So, be open, be patient, and ask for help when you need it. This is a business where it is a common practice, at least from my own point of view.

A huge thank you to François for sharing his story with us, and we can’t wait to see where his company goes with FMV games!

Want to explore solve puzzles in a sci-fi setting? Check out The World After which can be bought on both Steam and the Humble Store.

Alternatively, you have a top-down, action experience with I Wanna Build A Robot, or platform your way to victory in Multiverse Justice.

You can also check out Burning Sunset for further information on where François and the company are headed next.

Alternatively, you can also explore François’ cinematography showreel for more of his work.