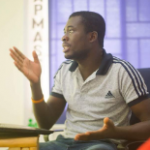 By Courtney Schneider on October 7, 2018 in Success Stories

Hey everyone! Today we have Oliver Mensah with us – one of our most pro-active developer alumni.

Oliver, thank you for joining us! Firstly, it would be great to hear about what inspired you to become a developer. Was there anything in particular that sparked your passion?

While in high school, my main aim was to become a medical doctor, however I later decided to take up Computer Science because I thought getting a job would be easier. Ashesi University is the best school for studying Computer Science in Ghana, and fortunately, I was admitted on 100% scholarship.

The challenge of studying Computer Science started in first year because typing was a problem for me and writing a program was hell.  Because my intention was being able to secure job after school, I thought that programming might not be for me, and considered changing to Mathematics.  I got to know a senior in my school who was popular because of his programming skills, so I asked his advice. That advice sparked my interest, and programming became my daily habit. My first real-world application was a web application I built for a client for a little token.  I realized that the more time I spent developing, the more it would pay off later, and that pushed me to focus more on developing projects.

Thanks so much for that insight – it’s great to know that not everyone finds coding easy straight away, but that like you, with practice and determination, a career in programming is possible! Since then, you’ve become very active as a developer – could you tell us about your latest projects, and about the Zenva courses that helped you with them?

While taking data structures and algorithm with Java Programming Language in college, Java was kind of difficult for me. By then I was following Chris Mills of Mozilla on Twitter, and he was writing some tutorials on HTML, CSS and JavaScript. I reached out to him, and he gave me some advice which encouraged me to learn everything I could about JavaScript.

It was then that I saw a course on Zenva on building games with JavaScript.  Taking that course on Zenva really helped me to understand JavaScript very well.  I can say that Zenva and Chris Mills contributed a lot to who I am today in terms of programming skills.

Although the Zenva course JavaScript Programming – Learn by Creating a Cross-Platform Game  focuses on game development, it really helps to build good programming logic that can be applied in most areas of development. I have adopted these skills in many projects I have worked on for few companies as an intern and now as an Android developer.

One personal application I have started working on in the past week is an app meant to centralize student news in one place – students get to know what is happening among other students from various campuses. The app has a friendly user interface, which displays news in lovely manner, sends notifications, and features a platform where students can communicate or discuss the news with each other.  This will be available soon on the Play Store.

You’ve come a long way from when you were a student struggling with development – you’re now a teacher yourself! We love that your mantra is “the best way to solidify your understanding is by teaching it to others”. Can you tell us a little more about how teaching has helped you develop as a programmer?

I believe that to understand something very well, then you need to be able to explain it so that even a beginner can understand it. One way I have done this is through taking on projects, such as writing articles for sites like dev.to, and through tutoring Boot Camps. Through the feedback from other developers who read my content, and those I have tutored, I got to believe in myself, and realize that I was on the right track working with tools and explaining concepts and techniques around them.

There was a day I was with my students, and all of a sudden, they started singing for me. I was so surprised. A link to video of that Boot Camp can be found here.  Asides from building knowledge, I am now earning some bucks after hard times, hahahaha.

It’s wonderful to see how incredibly self-driven you are – from your volunteer work, and even acting as the Co-Lead of the Facebook Developer Circle Accra. How has taking such an active involvement in the developer community helped your skills as a programmer? Are there any particular experiences that have really made an impact on you and your career?

During my second year summer break, I was interning with a company that provides a space where developers and entrepreneurs could meet and learn from one another. I got to engage in most of the events and from there, I developed an interest in the developer community. Being part of the developer community has helped me meet other developers who are working in big tech companies like Andela, Facebook and Google. Meeting these guys always challenges me to push myself harder. Some have mentored me directly and indirectly, and I can tell I have improved in terms of how I think about software design and architecture.

On a personal level, public speaking was a hastle for me way back in university. Attending and speaking at tech events have improved my public speaking skills. Career-wise, I have gotten some clients through recommendations from members in the community. When I was about to graduate from university in June 2018, I had a lot of offers from companies that wanted to take me on as a National Service Personnel without even requesting my CV or certificate. To me, it’s a blessing to be in this community – they’re some of the nicest people I’ve met, and are like my second family.

Thanks so much for all of your insight! Before we go, is there any advice that you’d like to share with your fellow Zenva Students?

To my fellow Zenva students, I wish I could meet some of you in person through community developer programs. Hopefully one day. Hahahaha. But before that, I will say you might think you are good while in you are just hacking in the corner of your room, but once you meet others, you’ll realize that there is a lot more you have to do. Getting involved in developer community programs is a good way to validate how much you need to learn and whom to contact when in need. Be part of developer communities in your schools or towns. If there are none, start one. Organizations like Facebook and Google are doing their best to help build developer groups. If you want to start  a developer community, I recommend visiting the Facebook Developer Circles page to read more about it.

A huge thanks to Oliver, for such an open, honest and inspiring look into his life as a developer! See you all next time…