Hey, everyone! Welcome to another Learner Success Story interview! Today we’ll be having a chat with Ahmed Alkhatieb, a Management Information System graduate who is now pursuing his childhood dream of becoming a game developer.

Thank you for joining us today, Ahmed! We’d like to start first by just asking what made you interested in pursuing game development?

Well, my dream of becoming a game developer started when I was young.

In my childhood, I was in love with computers in general – and specifically video games. You know that feeling when you meet a computer for the first time? And when you sit on a chair at a desk in front of the computer screen and start to discover its various applications, until you find the games folder? Well, that moment for me – and I think everyone shares the same opinion – can be one of the happiest moments you can experience.

However, this made me start to question how these games were being developed. How can I make such a game? What was really going on behind the scenes?

After graduating from university, I learned much more about app development, coding, and computer stuff in general. But, the question remained about how I would make my first game. What concepts should I learn? What is the environment in which games are developed? How do programming languages, such as C++ or C#, contribute to this?

From this point, my passion for achieving this dream and becoming a game developer increased.

As a Management Information System graduate, what challenges have you faced learning game development, especially given it’s such a different field?

Well, from having graduated, as I mentioned before, I learned the core concepts of app development and using programming languages (and their individual advantages). For example, I’ve learned Java, Python, C++, and VB.NET – each with its own concepts to master.

Although these languages can be used to do general coding projects, I have mostly worked with desktop applications and mobile applications (specifically Android). So with game development, which is a different development category, I actually had no idea about how it worked in full.

However, I knew that the same key concepts of development and coding, such as using object-oriented programming, would be the same. And, indeed, that’s what I have found as I have started the game development process. Although C# was a new programming language for me, its mechanics and concepts were the same as what I had learned. The syntaxes of this language were a bit different, but close to C++.

So, the real challenge that I have faced is learning the game engine itself and its mechanics. Let’s take Unity, which I’m currently studying and working with. At first, it was too weird looking and very complex – like the Inspector, the game objects, the file hierarchy, how objects connected to each other, what each component did, etc. All this stuff related to the engine looked very hard. But, after I started learning with courses and began to practice, all of this became common and easy for me.

You have successfully created three applications while in university. What can you tell us about these applications?

My first Android app, called “Tahe”, included recipes to teach cooking, and also had a shop to buy and sell goods related to food and foodstuffs. This one was my graduate project.

I have also built a virtual tour desktop app for both Windows and macOS for my university. It lets you explore the university in 360 degrees and get information regarding the colleges and university in general.

Finally, there’s my encryption desktop app which encrypts data and decrypts it. This one was actually a project for a cybersecurity course I took at university, and one which earned me full marks for that course as the final project!

How has working on those projects helped you in learning game development?

Actually, all of my projects have had an impact on my game development process. The Android app helped me figure out OOP in Java, which I do the same way in C# to build my games with a clean codebase. The desktop app helped me figure out the way to handle my games in general, and how to test, debug, and optimize my games’ performance. Lastly, the tour app gives me the idea of implementing the 360 technology into my game – which in the future I plan to start looking into the AR/VR development area.

What are your future plans in terms of game development?

Actually, right now, I’m still in the learning phase and, according to my learning plan, I still need to learn more. Once I get to a point where I’m ready, I will brainstorm all of my ideas with what I have learned to create my unique game!

We’re thrilled that Zenva has been able to play a role in your learning adventures and your goal of becoming a game developer. Can you perhaps share with us how Zenva has helped you with your goal so far?

In fact, Zenva has played a very important and big role in this adventure!

After I graduated, I started looking around to achieve my dream and to create my first game. There were many engines like Unity and Unreal Engine, but the problem was how to start with them. How can I learn the concepts, the logic, and the scripts? How do all these things happen? Where should I start?

While searching for weeks on the internet, one day when I logged onto my Facebook page, I scrolled the page as we all do. Suddenly, there was an advertisement displaying different amazing games with special discount offers and very extensive and detailed explanations for lessons with a platform called Zenva Academy. Well, at this moment, I knew I had found what I wanted as a starting point to begin my dream.

I visited the Zenva website for the first time, and a little window-like survey popped up asking me if I was excited to start my game development journey (to which I replied, “Oh yeah!”). Of course, then other questions appeared asking me which engine I would prefer. I chose Unity, and then the website asked me which one of Zenva’s curriculums I’d want to learn: Did I prefer RPGs? Or did I prefer 3D, survival, or VR?

Well, at this point, I didn’t know where to start! The joy I had was uncontrollable, and these options increased my curiosity even more! I inevitably chose the RPG Academy, and from there I started my first course – which was an Intro to Unity course. After that, the excitement really began and the way to my dream was becoming a reality.

We appreciate you for giving us the opportunity to talk with you, Ahmed. We have just one last question: what advice do you have for aspiring game developers – especially those who are more versed in non-programming IT areas?

They need to reconsider programming, in general, and developing games in particular. As we are in a time of changing technologies and information, programming has become a cornerstone of life – especially since no institution is devoid of computers and their applications.

And don’t forget that the financial return for game developers is very good, in addition to the fun they will have while developing their own games!

That concludes our interview with Ahmed, whose first games we’re looking forward to seeing in the near future! Thank you everyone for joining us.

Want to keep up with Ahmed’s game progress? Be sure to check out his LinkedIn page for updates! 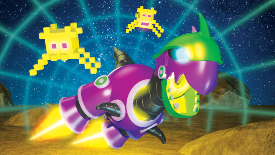 Boosting Creativity for Coding and Health with Humble Bundle