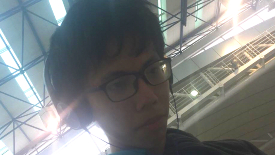 Thank you for joining us for this Learner Success Story! Today we’ll be chatting with Tan Zing Fung, a developer living in Malaysia pursuing indie game development.

We appreciate you joining us, Tan. To get started, can you tell us a bit about your background, and what got you into programming?

My background with game development primarily starts with GameBoy, which I played a lot in my childhood. Specifically, I played Pokemon Gold/Silver, which really inspired me to make my own game. Later, I found the YouTube channel Extra Credits and their video “Making Your First Game: Basics – How To Start Your Game Development,” which spurred me along further.

After that, I learned about the Unity Engine, and wondering both what it was and thinking it looked fun, I tried working with it. This soon led me down the path of game programming.

You’ve already made a few games in your pursuit of indie game development. What can you tell us about them and your experience making them?

With my various game projects, I tried to think of some sort of game that I’d otherwise never try to make.

So when I started, I began by looking at some of the code used in Zenva Academy’s projects and applying it to my own. Slowly, I tried various parts of the code out – and can I say starting out this way can be difficult. But once I finished my projects, such as Itsune Elaine Bouken, I felt very proud!

It makes us very happy to know our courses have helped you pursue your dreams so far. What courses have you been taking at Zenva Academy, and what drew you to them in the first place?

There’s been a bunch of courses that I’ve taken, like Discover AI and State Machines in Unity, Intro to Multiplayer Game Development, and various courses in the Strategy Game Development Academy.

What drew me to Zenva was that all of the courses looked very interesting, which inspired me to study with them.

As for the future, what sorts of game projects do you plan to build next?

Currently, I am trying to plan games by myself, and am working on a tower defense game with the Unity game engine.

We are just about out of time, so we have just one last question. What advice do you have for other developers who are trying to become professional indie game developers?

Well, to start, know that being a developer might be hard.

I suggest first trying to do some self-study by yourself, and then try making some sort of game or product. Don’t think too much about it, try it out, and make it fun, even if you find the work difficult.

And that concludes this Learner Success Story!  We want to give a special Tan Zing Fung for joining us, and we hope you’re all looking forward to Tan’s future games!

Want to play some of the games mentioned here?  You can check out Tan Zing Fung’s game Itsune Elaine Bouken or dive into numerous other games on Unity Room!