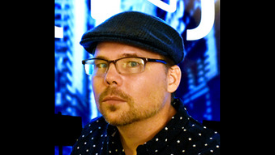 Welcome back everyone! This time, we’re joined by Derek Curry, who is not only a Zenva student, but an Assistant Professor of Game Design!

Hi Derek, it’s great to have you for an interview! To get started, it would be great to hear a little about you – how did you get into game development?

The first game I designed was as a graduate student at UCLA. In my MFA thesis exhibition was a game where people would complete the articles of incorporation for the state of California (which are surprisingly simple). After the game, if they were to mail those articles into the Secretary of State and pay the $40 filing fee, they would legally have their own corporation. After graduating, the recession that resulted from the housing bubble in the USA was reaching its peak. The news was filled with stories about complex financial instruments, like Credit Default Swaps that most people did not understand. So, along with Jennifer Gradecki, I co-founded a collective called Bankster Games. With a startup grant from the Puffin Foundation, we made free-to-play browser games and some card and board games designed to help people understand financial instruments and how they were used during the housing bubble.

It’s wonderful that even as an Assistant Professor of game design, you’re still actively continuing to learn. Could you let us know about the Zenva courses that you’ve enrolled in, and how they’ve helped you as an instructor?

I’ve enrolled in many Zenva courses, including the HTML5 Game Development Mini-Degree, the Unity Game Development Mini-Degree, as well as other classes on making game assets. Right now, I’m taking the Python Mini-Degree, which explains how Computer Vision works. In my position as a professor, my primary job is as a researcher developing new ways to communicate through games, and figuring out how existing interfaces (in game or otherwise) might communicate unintended things. My PhD focused specifically on financial trading technologies—which have many similarities with games, including the hardware they use. I use Zenva courses as a way to keep my coding skills sharp, particularly at times when I’m doing research that doesn’t involve programming or writing an article. In the classroom, my focus is usually on the theoretical end of game development, so I encourage students to use online courses, particularly Zenva courses, to hone their practice-based skills so that class time can be spent solving conceptual problems.

Working in the commercial game industry right now usually means working on a project-by-project basis, at least when you first start. There is a lot of work to go around, but it is getting more competitive, particularly for the positions that are considered more desirable, like working on the next iteration of an already established game at Blizzard or Sony. But there are also many opportunities that are overlooked by new game developers, such as advertisement games, news games, games to promote health, etc. So, there is a lot of competition among developers who want to make the next hit game on Steam or the Google Play store, but there are lots of other opportunities, like you could work for an NGO developing games to help players learn how to fight climate change by conserving energy. And the NGO is less likely to make you work long hours to meet the advertised launch date for the game.

Many of your projects encourage people to take a critical look at social and political assumptions. Tell us a little about why you believe that games can be such a great vehicle for messages like these.

There is a huge body of research that shows that people can learn from games. My first exposure to this idea was in graduate school when I found the book Homo Ludens, written in 1933 by the Dutch sociologist Johan Huizinga. It is considered by most to be the foundation of game studies. In the book, Huizinga proposes that culture develops and is taught through play. People understand social constructs such as laws or money because they learned how to follow game rules when they were young, the same way that some young animals learn how to hunt by chasing and play fighting with each other. Being penalized or rewarded in a game is how we learn to understand laws and accept paper or virtual money for our time and labor. The simplified rules of games are analogous to the complex rules of society.

For example, Elizabeth Magie’s Landlord’s Game (which is now called Monopoly) was based on the writings of economist Henry George and was used in the economics departments of Princeton and Haverford College as a teaching tool to demonstrate how wealth accumulates. Working from this idea, games have also been used as a way to prototype new rules for society, like Buckminster Fuller’s World Game, which he intended for world leaders to play to work out problems such as overpopulation or unequal distribution of natural resources. Games have also been used to prototype less altruistic goals, such as planning for war or making money in a business deal.

It’s fantastic that even while working as an Assistant Professor, you still have the time to keep creating games! Could you tell us a bit about your latest project?

The HTML5 Game Development Mini-Degree was very helpful in the development of my most recent game, WarTweets, which I made with Jennifer Gradecki. The game is built with Phaser, but has elements from Twitter built into it. The game is based loosely on the 1984 film WarGames. When a tweet is made from the @realDonaldTrump twitter account, an orange rocket is launched that must be intercepted by players of the game. US courts have ruled that President Trump’s Twitter account is part of the official presidential records, so he can no longer block users and anyone who tweets at him is registering their approval or disapproval of his official statements. The game is an experiment in gamifying political speech. The game is online, and can be played here.

Thanks for taking the time to chat with us! Before you go, are there any final tips or words of advice that you’d like to share?

My advice would be to consider a broad spectrum of possibilities, if game development is something you want to do as a career. When I meet students new to game design, they often imagine themselves working at a AAA game studio, starting their own IndieGame company, or making the next viral mobile game. These are all real possibilities, but as I mentioned earlier, there are a lot of opportunities for game developers in the area of news games, advertising games, and serious games that are often not considered. There is also a big need for programmers to make game-like interfaces for products that are not quite games, but are close. Games are often used by companies to train their employees, plan for war, and test business strategies. And VR games are now being used to treat soldiers and other people who have PTSD. One of my most rewarding experiences making a game was when I worked with a team of psychologists to develop a game that teaches young children delay of gratification, and this was not something I would not have even imagined was a thing when I first began developing games.

A massive thanks to Derek for his wise words of advice!

Want to learn more? You can check out Derek’s Projects here.