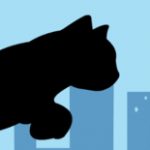 By Lindsay Schardon (ZENVA) on December 17, 2015 in Success Stories

With four years of web development under his belt and some basic Photoshop knowledge, Costin Mirica decided to broaden his technology skills and learn how to build a mobile app through the mobile app development courses.

Having not ever created an app before Costin talks of the challenges he faced along the way and how Zenva Academy provided all the tutoring he needed in building PAWs, a game that focuses on the users speed, focus and flexibility.

We catch up with Costin to ask him just how he managed to make such a fantastic game.

Your game is beautifully designed. Did you have any digital experience prior to taking the Phaser course?

PAWs would not have been / looked the same without the help of my co-worker and teammate, Cristina Moise, who drew and animated all of the game characters.

Cristina and I started to work at PAWs in our spare time. By day, we work as web developers and by night and in the weekends as indie game developers.

We hope that someday we can take our passion for game development full time and expand the two man team that “Ronin Mobile” is today.

What prompted you to create PAWs?

Building a game has been one of my biggest dreams since I was a teenager, when I was first introduced to programming, in high school.
But PAWs was not just an item to cross off my bucket list, it was also a challenge, both physically and mentally, due to the long and late hours in front of the computer almost every day, after my full time job, and in the weekends, for about 4-5 months. So it was quite a step outside my comfort zone.

Last but not least, building PAWs did not just help me improve my JavaScript skills, but it has also helped me understand more about games and game development through the experience and the situations that I’ve encountered and it forever changed the way I look at games.

What was some of the feedback you received with previous versions?

The most frequent feedback that I have received was that the game was too demanding and that the information displayed on the screen was a little hard to comprehend in a short period of time. The user had to be focused on the right side to avoid obstacles and on the left side to solve the mini-puzzle. Also, periodically, the user had to switch his attention to the center of the screen, to see the rule according to which he must tap the pads in order to score points.

At first, the game had rules regarding the color of the pads that needed to be tapped at a given time, but also regarding the type of numbers on the pads (positives / negatives / odds / evens), which made the game too difficult.

Basically, it was a little nightmare for your brain, there was a lot of information to process. This feedback made me go back to the drawing board and re-think some of the game mechanics. As a result, in the second version of the game, I’ve removed the numbers on the pads and the rules associated with them and I’ve added 3 basic shapes instead (triangle, circle and square).

The other reason for which I’ve removed the numbers was that some people have an adversity towards math / numbers and, for them, the game seemed very hard and confusing. Also, I’ve removed the text based alerts that were shown when the rule of the game changed with the actual picture of the color(s) / shape(s) the user must tap on.

By changing the text alerts and replacing the number on the pads with shapes, I’ve improved the gameplay because a basic shape like a triangle can be faster or easier recognized, rather than a number or the type of a number (whether it is odd / even / positive / negative).

Beside the functional improvements, I completely redesigned the menu state and I’ve also made the transitions between states a lot smoother, which gave the game a more “professional” look and feel.

Another requested feature was to add more characters in the game. So, in the second version of the game, we introduced 10 new cool characters that can be unlocked when the user reaches some predefined thresholds.

Did you come across any difficulties along the way? If so, how did you go about solving them?

The difficulties I’ve encountered originated in my approach when I decided to build my first game. My mistake was that I didn’t start small, with a simple game.
PAWs, even though it might look simple, it required some skills and knowledge that I didn’t have at first, so I ended up rewriting the game from scratch two times because I had low FPS and the game was choppy / jerky.

I was so focused on building PAWs as I imagined it that I completely overlooked the first rule when you start something new: “Start small!”.

PAWs has quite a large amount of favourable reviews. What would you attribute to its success?

Many of the positive reviews that I’ve received were regarding the game originality, which was what I’ve aimed for from the start, to build a challenging and original game, not just a clone of a successful game.

I wanted to create something new, unique, different from everything that was already on the market. By building PAWs I think I’ve accomplished that, the mix of a runner and a puzzle game turned out to be better than I’ve expected.

Are you interested in creating more games? Are you involved in any projects at this point in time?

Currently, I’m working with Cristina on a small Christmas update for PAWs which will include a winter background and 3 more surprise characters.
Also, by Christmas, I hope to release a second game that will be called “Save Christmas: Gift Rush”. The purpose of the game is simple, collect as many presents as possible and try to avoid hitting the icicles by switching platforms.

Furthermore, this game will be available for FREE and will not contain any ADS, this is our way of saying “Merry Christmas” to everyone.

Would you recommend this course to other potential developers? And if so what did you find most beneficial about it?

Of course! Beside the high quality of the course, you guys, at Zenva, were among the first who approached the Phaser framework.

More than a year ago, when I first started to learn Phaser, the Zenva course on HTML5 mobile game development was the first video course out there covering this topic and one of the few tutorials on the WEB regarding this subject.

Next, after your Kickstarter campaign, and after releasing the 17 modules tutorial, “The Complete Mobile Game Development Course”, Zenva Academy became one of the greatest sources of Phaser tutorials out there.

If I wanted to start learning Phaser today, this is the place where I would start!

Not just because of the diversity of games that you can learn to build by using Zenva’s courses and the high amount of information the course has to offer, but also because of the way the course is built and organized.

It’s very friendly to students with little or no programming experience, it starts gradually explaining basic game mechanics and after some concepts are explained, they are not repeated, which saves a lot of time and doesn’t bore students with the same details all over again. I think that this course is by far the best Phaser resource out there.
Costin would like to thank his teammate Cristina, his friends Adriana and Cristi and last but not least Cosmin, for helping to pull this one off.

Signup
Login
By signing in, you agree with our Terms and Conditions and Privacy Policy.
END OF FINANCIAL YEAR SALE - Get your first month for $1! Claim Offer
+